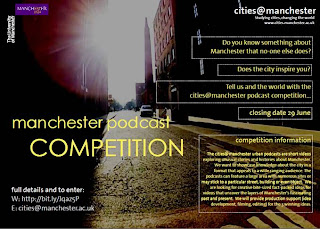 Fifty Years of A Clockwork Orange

﻿The programme of the ‘Fifty Years of A Clockwork Orange’ conference. 28-30 June 2012 at the Burgess Centre in Manchester, is available here:

The Burgess Centre is offering discounted admission to Manchester University postgraduate students and academic staff. Given the multi-disciplinary nature of the conference, which includes contributions from film directors, historians, psychologists, criminologists, musicians and philosophers, as well as literary scholars, they are confident that it will be of interest to researchers from a variety of subject areas.

The discounted fee of £40 will include a concert, a wine reception, and buffet lunches on all three days of the conference.

Further information is available from Paula Price on 0161 235 0776 or info@anthonyburgess.org
Posted by JdG No comments:

SONS Records is a record label based in Stoke-On-Trent City Centre. It has been running for 7 years, In which time it has accrued 8 Indie Chart top ten singles.

Over the coming months we plan to put out a string of releases by our groups The Novellos and This Is Seb Clarke, and we'd like to offer the opportunity for students to come and help out with online promotion, and get some first hand experience of the industry.

The work experience is offered on an unpaid basis, but we are very flexible with hours (allowing one to fit us in where they can depending on lectures/work load etc). There's no fixed term - we tend to sign a two week rolling contract with students, and after those two weeks play it by ear depending on what they'd like to do.

Its a great opportunity for students to gain an insight into how the music industry works, improve their communication skills, add to their CV and get a good reference.

All students are welcome, obviously Music and Business students may have the keenest interest, and as we'll be conferring with overseas markets then linguistics students who are bi-lingual would be fantastic too, as they'd have to opportunity to get involved with translating and interpreting.

The best way for a student to apply is to email me their contact details and CV to markbroome@sonsrecords.co.uk

Thanks for all your help on this

www.sonsrecords.co.uk
Posted by JdG No comments:

About the Scheme:
MQ will offer up to seven full-time Research Fellowship positions commencing in 2013, one of which will be dedicated to an Australian Indigenous Researcher. Fellowships will be awarded on a competitive basis and will be fixed-term for three years. Applicants must have been awarded their PhD on or after 1 March 2009, or submit their thesis by 29 August 2012 (or make a convincing case for early career researcher status). Any intending applicants for this scheme must discuss their Expression of Interest with their Fellowship Sponsor and work closely with them during its development.

For full details please read the Expression of Interest (EOI) Funding Rules 2013 and EOI Template, which are attached and will also be available on the Research Office website soon; you will be able to access them by clicking on ‘Macquarie University Research Fellowships Scheme (MQRF)’ at:
http://www.research.mq.edu.au/for/researchers/how_to_obtain_research_funding/funding_opportunities/internal

Faculty Review Process
The MQRF scheme is very competitive and only 20% of the applicants who submit an expression of interest will be invited to submit a full application. So this year we are asking all potential MQRF applicants to email the Faculty Research Office at ArtsRO@mq.edu.au regarding their Intention to Apply by 5 pm on Wednesday, 16 May 2012, including the following:
·     name and contact details

·     name of the academic who has agreed to sponsor them

The Associate Dean Research and members of the Faculty Research Committee will review each submission and assess whether the applicant's track record means they are competitive. Applicants will be advised of the outcome of this review process within 5 working days of submitting their Intention to Apply.

All welcome – no RSVP required

Faculty Deadlines:
Intention to Apply (see above): due at ArtsRO@mq.edu.au by 5 pm on Wednesday 16 May.

Complete, good quality DRAFT Expressions of Interest: due at ArtsRO@mq.edu.au by 5 pm on Wednesday, 30 May. Please email them by the deadline to ensure that you have time to incorporate feedback from review and compliance checks prior to the final Central Research Office deadline of Wednesday, 13 June 2012.
Posted by JdG No comments:

J. HILLIS MILLER:
The Theory to Come
An International Symposium

9. 30 am Welcome and Opening Plenary

Dragan Kujundžić (University of Florida)
‘”Like the beginning of an interminable waterway:” J. Hillis Miller and the Theory to Come

Sally Bushell (Lancaster University)
‘”An Encounter with the Unmappable’: or Treasure Island and Cartographic Silence’

Sarah Dillon (University of St Andrews)
'"Talking about the same questions but at another rhythm": Deconstruction and Film'

Charlie Gere (Lancaster University)
‘Hillis Miller, Luther Blissett, and the Politics of Friendship in the Age of Facebook’

J. Hillis Miller (University of California at Irvine)
‘Why Literature Still Matters to Me’

J. Hillis Miller is Distinguished Professor of Comparative Literature and English at the University of California at Irvine. Before going to Irvine, Hillis Miller taught at The Johns Hopkins University and Yale University. He is a Fellow of the American Academy of Arts and Sciences and a member of the American Philosophical Society. He is the author of many books and essays on nineteenth- and twentieth-century English, European, and American literature, and on literary theory. His most recent books are For Derrida (2009), The Medium is the Maker: Browning, Freud, Derrida and the New Telepathic Ecotechnologies (2009), The Conflagration of Community: Fiction Before and After Auschwitz (2011) and Reading for Our Time: Adam Bede and Middlemarch Revisited (2012).

Dragan Kujundžić is Professor of Film and Media Studies, Jewish, Germanic and Slavic Studies, at the University of Florida. He is the author of numerous articles in critical theory, deconstruction and literary criticism. He has edited Deconstruction, A Merry Science (1985), Khoraographies for Jacques Derrida on July 15, 2000 (2000), Who or What—Jacques Derrida (2008) and two volumes on J. Hillis Miller, J (2005) and Provocations to Reading (2005). His other publications include monographs Critical Exercises (1983), The Returns of History (1997) and Tongue in Heat (2003). He has also edited volumes on Walter Benjamin, and Mikhail Bakhtin. He is currently working on the new monograph, Ghost Scriptum and on a book based on his recent film (2011) The First Sail: J. Hillis Miller.

Sally Bushell is Reader in British Romanticism and Co-Director of The Wordsworth Centre in the Department of English and Creative Writing at Lancaster University.  Her primary research interests are in Wordsworth, textual criticism and the study of poetic process and the long poem.  She is author of Re-Reading the Excursion (2002) and Text as Process: Creative Composition in Wordsworth, Tennyson, and Dickinson (2009) as well as co-editor of the Cornell Edition of The Excursion (2007). Current research is on literary place as embodied in empirical literary maps as well as larger ideas of Literary Cartography and the ways in which we read and map literary space.

Sarah Dillon is Lecturer in Contemporary Fiction in the School of English at the University of St Andrews. She is author of The Palimpsest: Literature, Criticism, Theory (2007) and editor of David Mitchell: Critical Essays (2011). She is Series Editor of Gylphi Contemporary Writers: Critical Essays and has published widely in the fields of modern and contemporary literature and philosophy. She is currently completing two books: Dancing with Derrida, an investigation of the question of "woman" in Jacques Derrida's work and contemporary fiction and film, guided by the trope of dance; and Venturing Derrida (co. ed. Sarah Jackson), a collection of new essays by the next generation of Derrida scholars.

Charlie Gere is Reader in New Media Research in the Lancaster Institute for Contemporary Arts, Lancaster University. He is the author of Digital Culture (2002), Art, Time and Technology ( 2006), Community without Community in Digital Culture (2012), and co-editor of White Heat Cold Technology (2009), and Art Practice in a Digital Culture (2010), as well as many papers on questions of technology, media and art. In 2007 he co-curated Feedback, a major exhibition on art responsive to instructions, input, or its environment, in Gijon, Northern Spain.

Michael Greaney is Senior Lecturer in English at Lancaster University. He is the author of Conrad, Language and Narrative (2002) and Contemporary Fiction and the Uses of Theory (2006), and is currently working on representations of sleep in modern fiction.

Simon Marsden is a Teaching Fellow in the Department of English & Creative Writing at Lancaster University. His research focuses on the intersections of literature, theology and the philosophy of science in the long nineteenth century and beyond. He is the author of the forthcoming monograph Emily Brontë and the Religious Imagination (2013).

John Schad is Professor of Modern Literature at Lancaster University. He is the author and editor of many books on Victorian and Modern Literature, literary theory and religion. His documentary novel, The Late Walter Benjamin, comes out in May 2012 and Hostage of the Word: Readings and Writings 1993-2013 is published early next year.

Andrew Tate is Senior Lecturer in English and Associate Director of the Ruskin Research Centre at Lancaster University. He has published widely in the field of nineteenth-century literature and contemporary literature and theology. His books include Douglas Coupland (2007), Contemporary Fiction and Christianity (2008) and, co-authored with Arthur Bradley, The New Atheist Novel (2010).

If you are travelling by car, leave the M6 motorway at Junction 33 and take the A6 north towards Lancaster.  For Lancaster University main campus - turn right at the third set of traffic lights on the A6 into the University main drive.  Take the first exit left from the roundabout at the top of the main drive, then the first avenue on your right. This brings you to the Reception Lodge where security staff will direct you to your destination on campus.  If using an online route planner or satnav, please note that the university postcode is LA1 4YW.

If you are travelling by rail, there are direct rail links between Lancaster and many of the UK's major cities and airports including Manchester Airport. For train times, visit National Rail Enquiries. The X1 bus service runs every 20 minutes between the University and the Railway Station (hourly on Sunday afternoons and evenings). Taxis are available at the station, which is a five minute walk from the city centre.  Local taxi services can be contacted on: +44 (0)1524 35666 and +44 (0)1524 848848.

In Lancaster city centre, you will find a variety of accommodation available to suit all budgets: